The Mendocino County Homebrew Festival and Wildfire Safety Expo on Saturday, May 21, 2022 from 3-6 pm at the Anderson Valley Brewing Company in Boonville was a huge success! Stay tuned for details about the 2023 event. 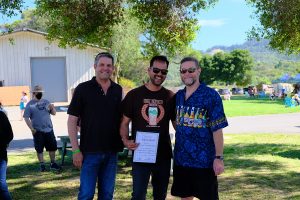 The afternoon featured more than two dozen brewers from around Northern California competing to become both the people’s choice and/or the brewer’s choice winner. (The event was also open to ciders and other fermented beverages.) Food was available for purchase from Slam Dunk Pizza and Fairall Farm’s Little Blue Food Wagon, and there was live music from the Back Porch Trio. There was a concurrent (free!) Wildfire Safety Expo with tons of information and service providers, kids activities, opportunities to meet and talk with local first responders, and tips and swag to stay fire safe.

Proceeds from the Homebrew Festival benefitted the Mendocino County Fire Safe Council, which informs, empowers, and mobilizes county residents to survive and thrive in a wildfire-prone environment. Attendees will have the chance to talk to and learn from local first responders, pick up some fire-safe swag, and connect with neighborhood Fire Safe Councils.

People’s Choice: All attendees got three bottle caps that they can use to vote for their favorite beer by dropping the caps into designated containers. Ribbons and awards will go to 1st, 2nd, & 3rd place vote earners.

Brewer’s Choice: A separate tasting and judging was conducted by professional brewers, led by Fal Allen of Anderson Valley Brewing Company, to select a top quality beer to be brewed by AVBC! The winning brewer will get to assist on brew day, learn about scaling their recipe, and use a commercial brew system.